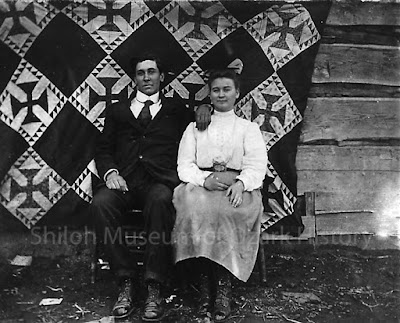 This photograph has quite a bit of information attached to it. The people are Oscar Roach and Evie Thomas of Madison County (no indication if that's Missouri or Arkansas) in about 1905, and the Shiloh Museum of the Ozarks owns the photo.

There are a couple of things that stand out to me in addition to the "Uncle Sam's Favorite" quilt as the backdrop.

First, the expressions on their faces make me wonder about them.  Are they smug? Defiant?  Or the camera just caught them that way?

Second, the skin color is strange, as if the image has been doctored somehow.  The man's hand on her shoulder is very dark, and the other three hands look as if they are tan on the backs, but the fingers are white in between.  I'm thinking it could very well be a poor PhotoShop job!

Anyway, the quilt is a magnificent specimen.  I'm not quite sure why it's called "Uncle Sam's Favorite" but I like it. And I will always wonder what colors they used!


A Blessed Sunday to You!