I have just finished a long project and wanted to share it with you.

The story goes like this:
About 2 1/2 years ago, I was plotting to make a quilt for my youngest, Ian.  He is now 22.  I had been to the "At-Home Quilt Retreat" our quilt group was having that February, and had been talking about it with my friends.  I was trying to decide whether to surprise him, or ask his input.

When I got home that very evening, he and I were the only ones up and I was hanging up my current project on the design wall after having worked on it for the weekend.  He said, "Mom, would you make me a quilt?"  Well, wasn't that quite the opening?  So, I told him my dilemma.  He liked the idea of being in on it a little bit, so gave me some color ideas (black and red) and I started planning.

I gave him two choices of pattern.....Sweet Insanity and Colorado Log Cabin.  He chose the second.

I was struggling to figure out how to make black and red work because I had never thought to use those colors myself!  I landed on pulling out my Civil War reproduction fabrics and started playing with them.  He came up beside me and saw I what I was doing and he said, "Mom, would you actually use your Civil War fabrics??"  And I answered, "You know, Son, that's how it's going to work for me!" 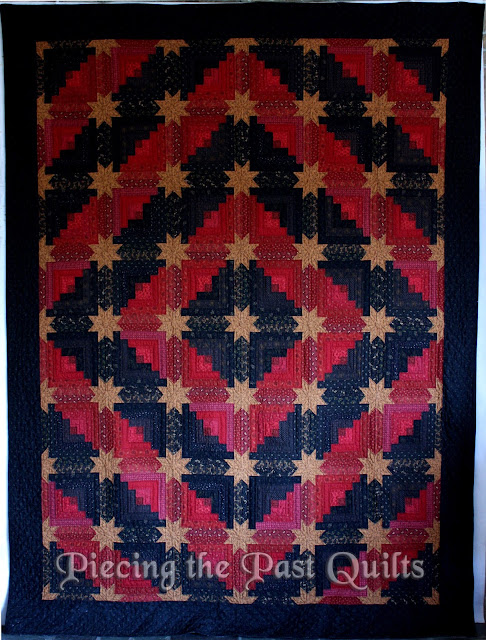 We love what the gold stars add to the mix. 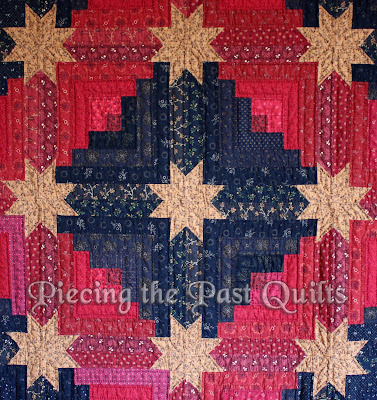 There's a cute story about the little label I sewed into the binding.  All of our kids had in-utero names, and his was Baby Boomer.  The Boomer part stuck and he goes by both Ian and Boomer.  Well, at that same retreat, one of my friends was making a selvedge quilt (it is awesome!) and one of her selvedges caught my eye.  It read "Baby Boomers by Debbie Rogers for Moda." She offered it to me so I could use it on Boomer's quilt.  It's been tucked away in a secret place waiting for the finish.  Go figure!   How many moms named Debbie have a son named Boomer?  So, it's sewn into the binding and it tickled my son, as it did me.  Sweet little things that are endearing.

So, that's what I've been up to.  It's going to the fair next week!