I thought we might explore Whig Rose Quilts this week.

As I've looked at the enormous variety of them, the things that stand out to me are first, the different array of colors used (not all are red and green), and second that there are a number of patterns called "Whig Rose" but the patterns vary from 4 to 8 flowers.
I found this on the history of the pattern:
"The pattern name “Whig Rose” was a popular nineteenth century pattern inspired by politics. The Whigs were an American political party formed around 1833 in opposition to the [Andrew] Jacksonian Democrats. Members of the Whig party included William Henry Harrison, Henry Clay, Zachary Taylor, John Tyler (who was eventually expelled from the party), and Millard Fillmore. By 1856, the Whig party had dissolved, torn apart by the issue of the expansion of slavery into the territories.
This quilt, therefore, is a wonderful document of the history of textile dyes and needlework fashions and a reflection of political history."
You can read more here:
http://museum.msu.edu/glqc/collections_2005.20.1.html 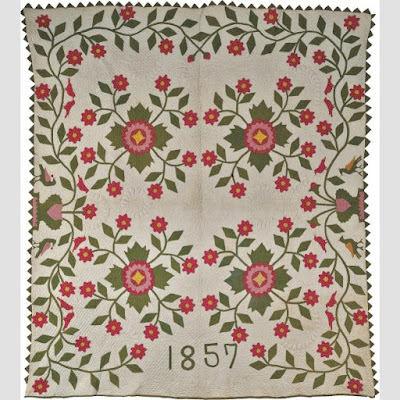 This one was made in 1857-1858.  Obviously there's the date appliqued onto the quilt, but there is also a quilted inscription of "Abigail Hill 1848" below it.  It is made in the classic red and green color palette, with some added pink.  Aren't the vases wonderful?
You can see more about this particular quilt at the Folk Art Museum. 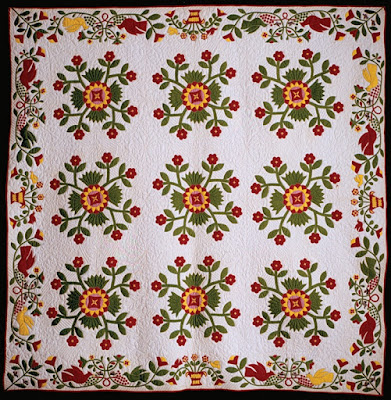 I have found no information about this quilt other than its dating and probable location of origin.

It also follows the tradition of red and green, but adds the sparkle of yellow to delight the eye. There's also some pink in the flower centers to add depth.

The thing that struck me about it is the beauty of the border.  Isn't it amazing? Birds, leaves, flowers, baskets and berries.  All are designed in such a beautifully flowing pattern. 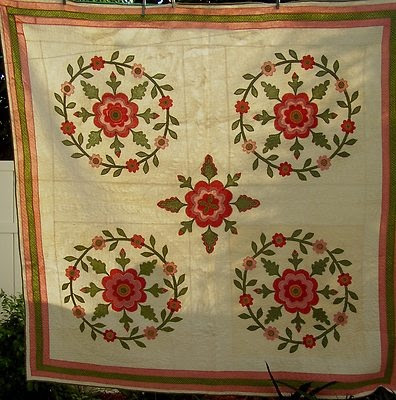 This one is made in poison green, turkey red, and double pinks.  The border is just simplicity itself, which sets off the beauty of the rose circlets.  Though the lighting isn't great, you can see a bit of the magnificent quilting around the flower circles. 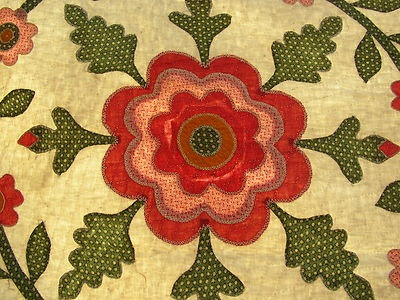 Here's a close-up of the detail.  Interestingly, the leaf stems are visible under the red flower petals.

Unfortunately, I have no more information on it. 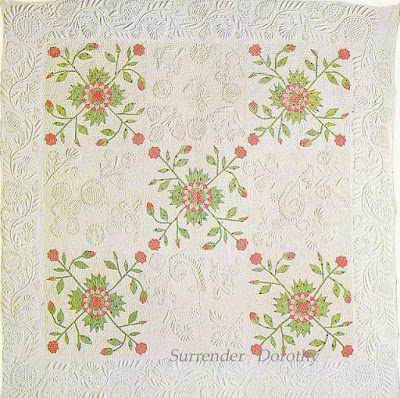 I love this one.  The graceful placement of the roses and buds, the subtle color of pinks and greens, the simplicity of only 5 blocks.....all of it makes me happy!

The trupunto is astounding.  Just look at the detail of it!  This had to be someone's masterpiece.  I wish I knew who made it and where she lived.


Thanks for joining me on this tour of Whig Rose Quilts!


PLEASE NOTE:
- I am not a quilt historian.  I simply enjoy finding interesting quilts and sharing them with you!
- The quilt images on this post were sourced from Pinterest unless otherwise noted, and are linked to their origin whenever possible.
Posted by Debbie at 12:30 AM